When most people think if Alaska they probably think if the iditarod sled dog race. Well this weekend you would be right! On Saturday we went to the ceremonial start of the race over at University Lake. The mushers and their dog teams start downtown and go through the trails around the city lined with adoring fans and photographers from all around the world. We used to go downtown where they announce each team as they start with the tremendous crowds of people, food vendors, native crafts and more people. It is still a lot of fun to do that, but we found that if you travel a little down the course you can get a better look at the teams as they go by! And get a parking space.

A nice lady took our picture while we waited for a team to come by. 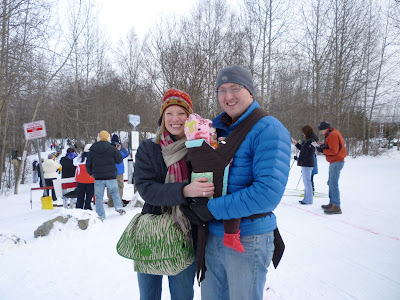 This is probably the most famous musher, Lance Mackey. He won the iditarod the last three years in a row. You could tell it was him because everyone went crazy, holding up signs and cheering his name. You can see people holding out their hands to give him five as he speeds by. 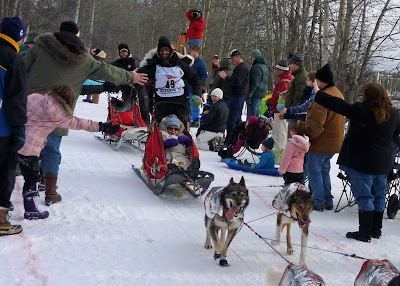 Here is rookie musher, Dan Kaduce. It was the best picture of the day. Our nice camera was out of batteries so I was using the (comparitively) super slow point and shoot....most times it didn't take the photo until after the team already passed. This shot was a my crowning glory. 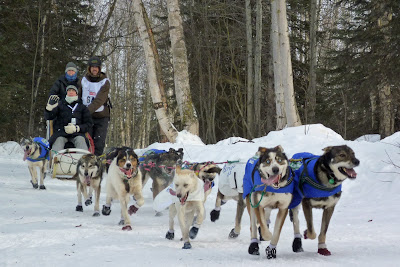 Chloe wasn't super interested in the whole thing this year, so we had to find other ways to entertain her. It was bright so we gave her my sunglasses. 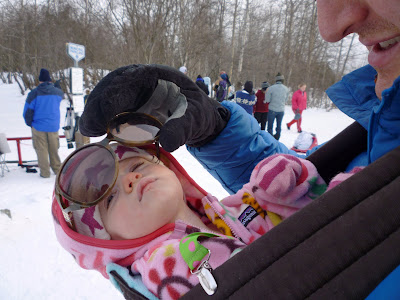 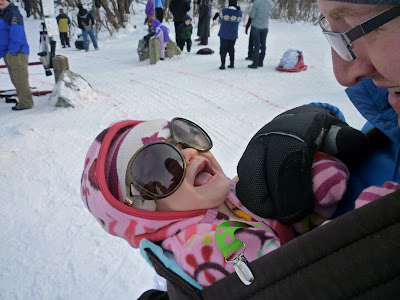 About 30 minutes in, our little angel fell asleep in the baby hawk. We wanted to be sure she would stay warm enough so poor Andrew put on by pink scarf to wrap around her. It did the trick, and we got a little "alone time" while she snoozed. 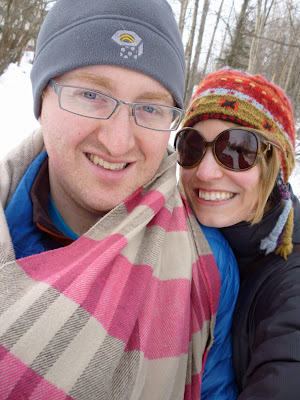 Dad and sleeping baby standing above the race trail. (He looks pretty good in pink right?) 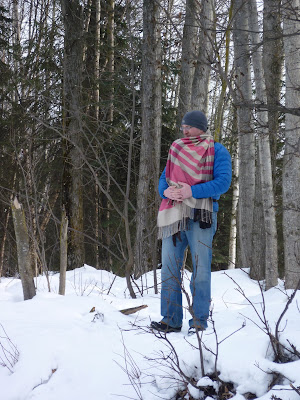 Look who woke up!! 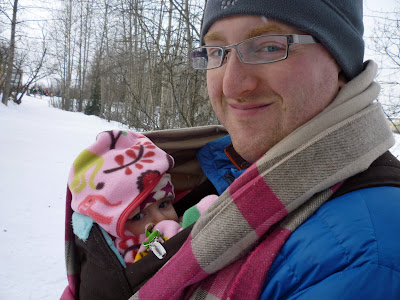 I got a little baby time in too, don't think I let Andrew have all of the fun! 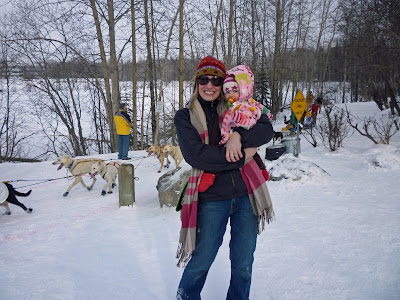 One last group photo, and we were off to lunch then home for a daunting home improvement project. Photos to come (I am waiting for the after picture....). 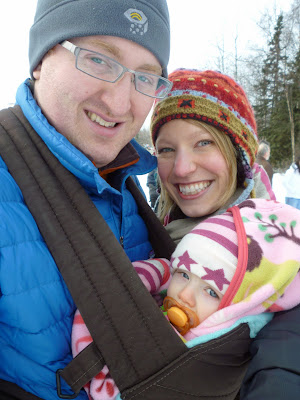 I am already looking forward to this next year when Chloe is totally mobile. Lots of kids were there sledding, and playing in the snow. It was pretty adorable!
Posted by Carmen at 10:00 PM

Ah! The cute - seriously how adorable is your family? Love the sunglasses on Chloe, classic :) I thought that race was a solo thing, am I wrong?

yes, it is a man vs nature race. The "team" is the musher plus his dogs. In the pictures there is an extra person riding along for the ceremonial start because they won the seat in an auction. Basically the extra rider is super rich or super lucky, or maybe both! Sometimes a handler rides along too in the back to help out the musher by untangling dog leashes, and keeping everyone on track and on schedule. The handler is also just allowed for the ceremonial start after that the musher is on his own in between checkpoints.

Amber is right... Seriously your family is so cute! It's nice that you share so many of your outings, you're always having fun! Isn't the outdoors wonderful!