We felt pretty lucky that while we were visiting Oregon we got to enjoy the sunshine!! Chloe got to experience grass for the first time (newborns don't really get out much those first few months). It was funny to see her carefully touch it, at first it was a bit prickly to her, but soon she was loving it! 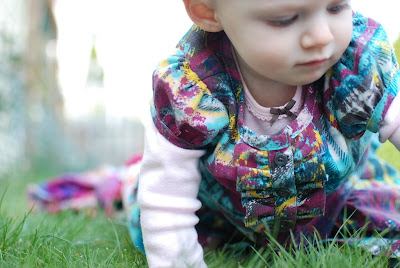 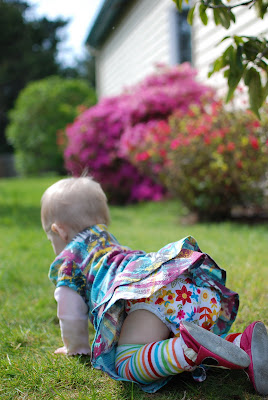 Getting silly with Grandma Peters 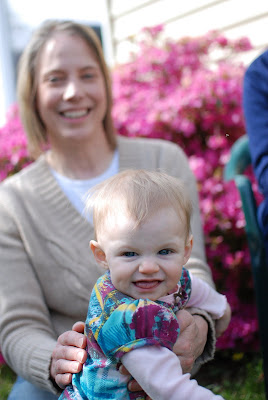 All smiles with Mom. 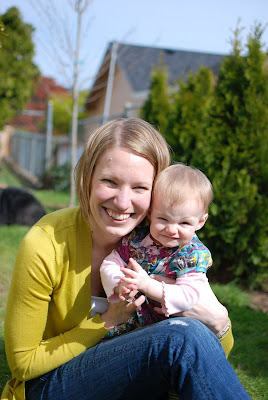 After all that fun in the sun we took a few sick days, then pulled ourselves together for some playtime with Tuesday (and her Mom Amber and the Grandma Julies too)

Tuesday's Parents are super amazing parents, and even installed a swing in their basement. Chloe seemed to love helping push Tuesday in the swing just as much as riding in it herself! 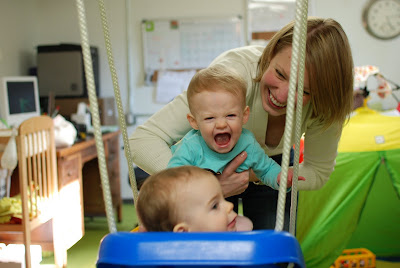 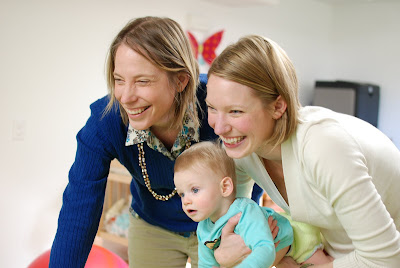 While the girls were together we took the opportunity to give them a bath together. It was so funny to watch two super excited girls play in the water together! 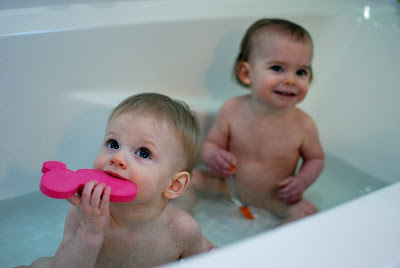 This may have been the highlight of Chloe's trip! 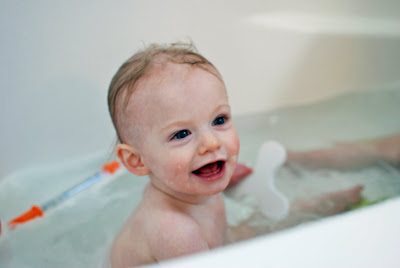 This picture captures it all. Chloe hysterically squealing and splashing Tuesday, who put up with her craziness and toy "borrowing". 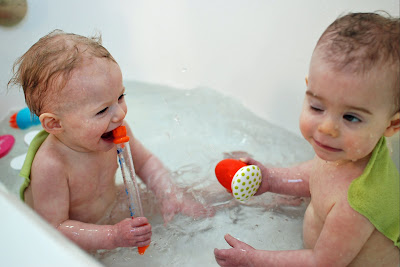 Isn't Tuesday adorable??? Thanks for sharing your bath toys! 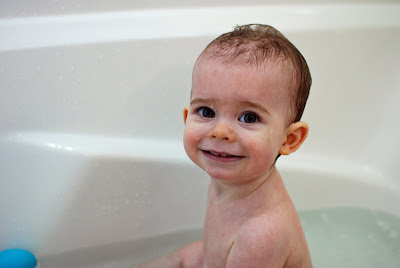 We had a great time, but we were happy to get back home to our cribs and warm beds :) We were pooped after all that traveling!
Posted by Carmen at 9:13 PM 2 comments:

Okay, sorry to all of you avid readers of our blog.....we are back in Alaska (for almost 2 weeks now), and doing well! All three of us came down with something after we got back but we are all feeling great now (FINALLY)!
So a recap- we went to Seattle for work then tagged on a quick trip down to see Chloe's grandparents in Oregon. It turned into a super quick trip after we all were put down cold with food poisoning right after we got there. Only Chloe was spared- as she was the only one who didn't devour the deceptively delicious Thai food take out. We had so much we wanted to do and so many people we wanted to see, it was a real bummer to get sick. On a positive note, it may be the only vacation I have taken where I actually lost weight :)
Seattle pics:
Chloe's first ball from Punk: 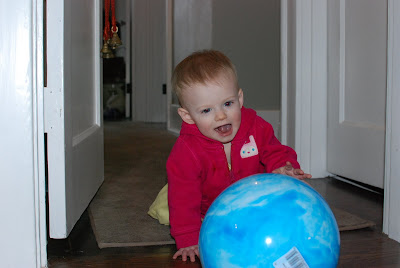 Excited to meet her "sort of" cousin Farrah-- 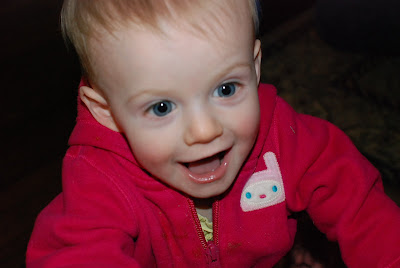 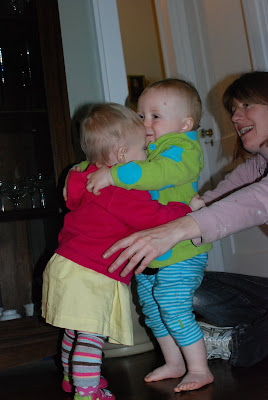 Easter brunch with Jodi, who refused to be photographed, but took this great family photo of us and Chloe's bread! 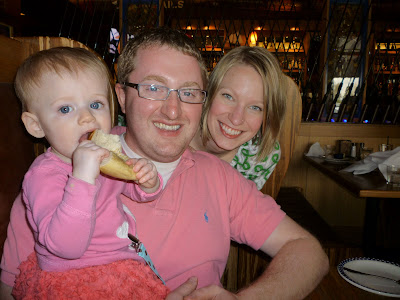 Chloe in our hotel room 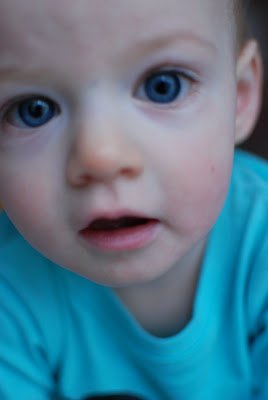 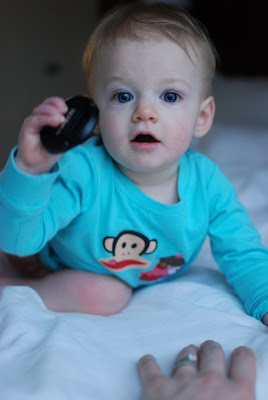 Enjoying the other hotel amenities. She also loved swimming in the pool, but somehow we didn't get a photo of that! 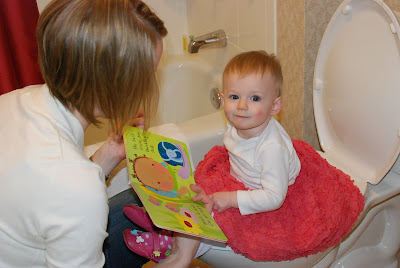 I have been feeling really guilty that I haven't had time to sit down and put any photos up, but last night was the first night since we got back that Chloe has slept any longer than 2 hours at a time during the night. It has been R-O-U-G-H. She definitely had a cold, and we are still pretty sure she is teething although no teeth have made an appearance yet. Here's hoping she is on the mend, and better sleep is in our future!

More to come!
Posted by Carmen at 8:19 PM No comments:

We made it to Seattle safe and sound. The plane ride was pretty uneventful. We tried our hardest to entertain her and to get her to sleep the whole flight down, and of course she didn't fall asleep until the plane landed.....come on really??!!! We came down for work, so that filled up most of the week but Andrew and Chloe had all sorts of adventures with her new backpack. She loves that thing!! She pretty much giggles and squeals with excitement the whole time she is in there. Andrew said she passed out in there too. So it is fun and also induces sleep.....we should have got one sooner!! 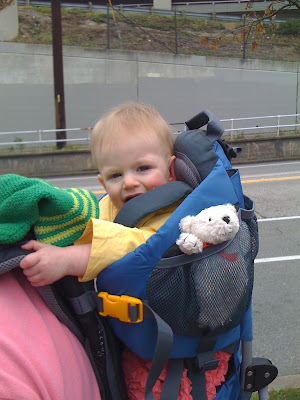 Chloe has been exploring the culinary world with us, and is now able to have some foods. We went out to an awesome pizza spot in Seattle, and Chloe got some pizza crust and cheerios. Yum. We tried every pizza on the menu except one (it was happy hour) and LOVED every bite!! I think my favorite was the yukon gold potato, rosemary and pectorino pizza. Andrew's favorite was the yellowfoot mushroom and truffle cheese pizza. Seriously it was hard to choose a favorite. The pizza was amazing (even better than mooses tooth). 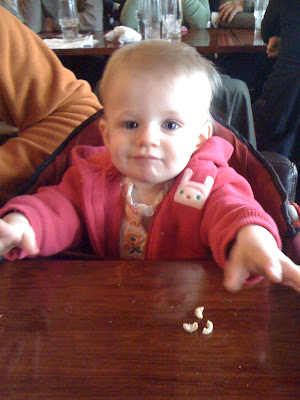 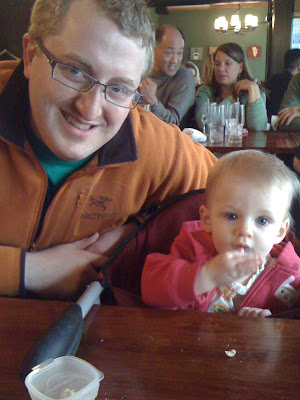 We also discovered that Chloe is a true northwestern baby. She LOVES the wind. It was blowing hard in Seattle, so hard that it was difficult to get forward motion against the wind. She freaked out- in a good way. We couldn't stop laughing at her laughing. She squealed louder than we had ever heard....kicked her legs and laughed continuously whenever we were outside, and especially if there was a wind gust. She loves it here! 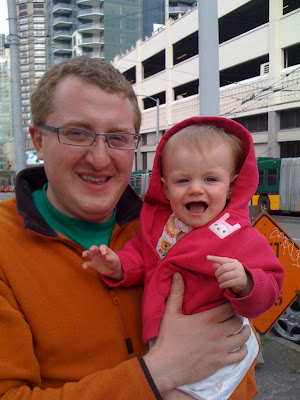 Chloe is napping now, so I have a minute to post some i-phone photos. More to come when she wakes up, the camera cord is down in her room :)
Posted by Carmen at 10:33 AM 2 comments: